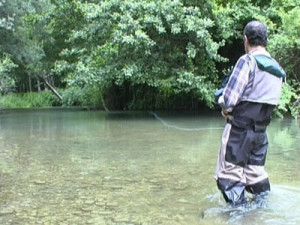 These are two of the most spectacular casts of the Italian Casting Technique, two masterpieces of dynamics which are useful for getting under the bushes and to fight drag…

In the past many anglers thought and many still do that in fly fishing, casting plays a secondary role. And that managing to cast a decent line and perhaps doing some mending was more than enough. This wrong conception which has lasted for years, has in fact limited the great potential that every fly fisherman has and many a fisherman would promptly renounce to casting to a rising trout in a difficult lie like under an overhanging bush on the opposite bank. Today this concept has no reason to be, as it is now possible to place your fly anywhere on the river and whenever you want. All this thanks to the technical evolution of casting.
I’ve often heard old fishermen saying that it isn’t necessary to be an exhibition caster. I agree to a certain extent but getting back to the previous concept, being able to place your fly under an overhanging bush because the fish feels safe is much too important. This said, it’s true that one of the many goals of a fly fisherman is trying to catch trout in difficult situations which only confirms the fact that it is better to catch a small trout in a difficult situation, than a big but easy trout. Being able to cast your fly under an overhang is precisely one of these goals if only for the pure satisfaction and a cast that will let you do this is the Low parallel Cast. This cast perhaps sums up the whole concept of a high speed cast. It may look quite difficult to do and effectively if you are not taught by someone who knows, it is quite a challenge.
The Low Parallel cast as we have said is the cast that will get your fly under a low overhanging bush and to get it right the line needs to travel perfectly parallel to the water and only a few cm above it. This priority is difficult to achieve and at the end of the cast the line looks as if someone is pulling it from the end of the leader.

The primary element behind this is extremely high speed that you need to give the line and in order to do this you need to act differently. To execute this cast, as a primary element you use the butt of the rod as against normal casts where you use primarily the tip. There are some basic technical reasons for this which we will analyze later. Effectively, the low parallel cast is very effective but also good to look at and the operations required to carry it out are all finalized to maximize the use of the space that the arm has.

Admittedly the execution of the Low Parallel casts and the Superimposed casts are not very easy and this article should serve to inform the reader of their existence.
Getting back to the Low Parallel cast, you start with the rod quite high up behind you, held perpendicular without any inclination. You will then move the rod down making sure you bring the butt and reel forwards and keeping the rod tip slightly behind the rest of the rod. The reason for this is that you need to load the butt section of the rod instead of the rest. Continue with the butt in front increasing the speed progressively until the your arm is held out completely parallel at your side or slightly in front. Once the arm is almost completely stretched out without rotating your wrist (and this is the most important part), you will exert a final thrust in a very short space and the rod unloads. The rod tip acts like the sights on a rifle and will serve to guide the line which at this point is travelling parallel to the water at high speed
The importance of the butt section

The butt section plays a fundamental role because it gets loaded until the arm is almost completely stretched out and then it unloads all the power in a very small space when the rod is parallel to the water. The secret to do a good Parallel Cast is to unload the power in the rod without rotating your wrist at all. At the same time your left hand will have kept tension in the line and as usual at the moment of maximum acceleration it will traction even more to impress more line speed.

The left hand will release the line late – almost when the line is completely turned over. The line will then travel parallel for a few meters and will easily penetrate under overhanging bushes. In conclusion, you may imagine that if you do not have the right synchronisms and velocity, the results of this cast will be null.

Regarding the Superimposed cast which is undoubtedly effective – this cast is very similar to the previous one because it helps to cast under bushes with the advantage of preventing drag and helping to get a good drift. The superimposed cast is not a parallel cast like the low parallel cast even though it starts off in a similar way but at the end it will have an inclination or angle. 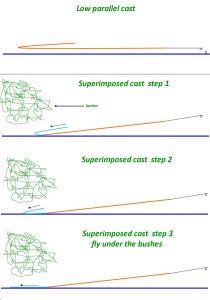 The secret to this cast is to get the tip of your line i.e. the part where you connect your leader in the water first. The leader will then continue by inertia over the tip of the line and the trick is done. To execute this cast, on the contrary to the low parallel cast, you will flex your wrist and at the same time bring your arm forwards when it is almost completely stretched out along your hip and so the line acquires an inclined movement and release the left hand early and the moment the tip of your line touches the water. At this point the initial speed that the line had will fade and this will allow the leader to reach your goal at a much slower speed. In fact by releasing your left hand more or less earlier, you will either get the line to bunch up or the fly to reach your goal at a low speed. For this cast you need a very light line like a DT 3 which should be cast with a very fast rod that isn’t too stiff in the butt section or it will not load.