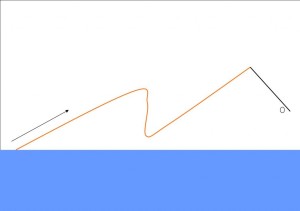 The Wave and the Spiral, apart from being useful to lift your fly off the water without creating waves, splashes and getting your fly completely soaked, also serve as a base for other casts like the Anchored cast.

Doing a wave cast is quite simple. Lift the rod and bring the rod tip high up and relatively slowly. Immediately afterwards move the rod 30 – 40 cm towards the fly to prevent dragging the fly towards you. Then move down delaying the descent of the tip with respect to the butt and when you have reached your side you will push downwards with the butt and then also with the whole length of the rod. This produces a wave which when it reaches the fly will cause it to lift delicately from the water. Immediately afterwards you should execute your backward cast to prevent the fly line and leader from hitting the water. 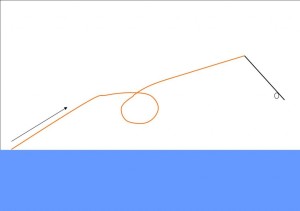 To execute the Spiral you must do a sort of wide circle with the tip of the rod moving it towards the direction of the flow and also in this case moving slightly towards the fly for approximately 30 – 40 cm to prevent dragging the fly towards you. This generates a large spiral that when it reaches the position above the fly, will lift it perfectly from the water. If you operate anticlockwise during the phase in which the tip is moving downwards, you will exert the greatest thrust.

The Small roll casts as the name indicates are small casts that follow the axis of the rod towards the fly after a drift and when the fly is no more than 3 – 4 meters from you. It is important that you cast parallel to the water to lift the fly better from the water, which instead of being presented again like in a roll cast will be immediately cast backward