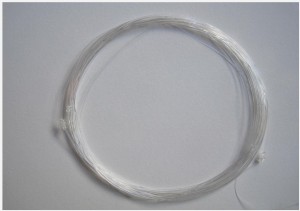 The leader is an element of extraordinary importance which is not completely appreciated for the enormous advantages you can have in fighting drag. The loops are micro perfection loops that are used to join the various parts of mono when making a knotted leader. Let’s get things straight. Starting from the principle that in order to fight drag, apart from specific anti-drag casts, it is also necessary to have a specific leader with certain characteristics regarding length and the kind of taper, the more rigid the leader is and the more difficulty you will have to model it. Recently in relation to this, the concept of “many knots” (more knots = more rigidity) has been demolished. Today self made leaders tend to have a maximum of 4 knots and an attempt has been made to tie less voluminous knots. Then very elastic monos were used but in my opinion all this was not enough. One more step was missing in order to make the leader more supple and which would adapt to the superficial currents, in the case of the dry fly and to the underwater currents in the case of the nymph. So on which element of the leader could I work to achieve these results? I had the idea to connect the various sections of mono not with classical knots but by means of micro perfection loops. I have no idea if this method of joining monofilaments for leaders has already been used by others, but the fact remains that I have never heard of anyone else. A leader made with this system may seem useless but you really need to try it out! The big problem with drag arises not so much in rough waters but rather in calmer ones where it’s important to reduce the wake effect caused by the fly and by the tippet. In these calmer waters, there are micro currents which are invisible to the naked eye but no less treacherous. 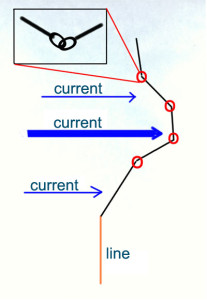 These micro currents are usually generated by rocks which are 50 – 60 cm under the surface and the water seems to flow down quite normally and in places where you would normally cast without considering the consequences. In other words, strong currents are easy to see while these minor ones are not, especially to the untrained eye and it is on the latter ones that a looped leader comes into use and can be more productive than a normal knotted leader. The micro loops act as hinges and hold very well both when setting the hook as well as during the traction when playing the fish. The instructors of my school and I have tested these leaders and have never had any problems. In the beginning we had some understandable doubts which were: would the leader be strong enough, would there be sufficient transmission of energy, would they be accurate? The doubts were slowly dissipated and this gave me great satisfaction. So they hold well; there is no collapsing effect in the transmission which in theory we should have had due to the hinges. Our biggest doubt was accuracy – but even with this we had no problems as long as the tension during casting is kept constantly which by the way is a problem even with classical knotted or tapered leaders, if the tension during casting is lost, the whole structure collapses. So once our doubts had been dissipated we started evaluating which advantages we could get especially regarding drag. We tested both classical leaders and looped leaders in the same conditions and got some extraordinary results especially in those conditions with the treacherous micro currents and strange surface tensions. I take this occasion to thank my friend Massimiliano Nucci who is a FFM instructor and expert in knots for the technical support he gave me during trials. In conclusion this leader could revolutionize the concept of the leader whose importance is equal to that of the casting technique in fighting drag.