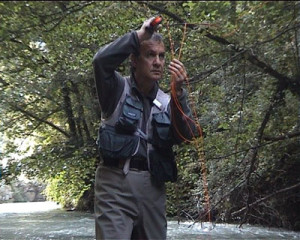 When fishing and you have obstacles on your casting hand e.g. on the right if you are right handed (or on the left if you are left handed) and you cannot cast you have two possibilities – you either change bank or you change cast. Let’s consider the second choice – you will need to do a backhand cast.

There are two ways of doing a backhand cast: the classical one and the parallel one. The latter is more complete because as a backhand cast because it can be a base for other casts like the backhand mended cast.

Classical Backhand
The classical backhand cast is done by moving the rods from right to left by 90 degrees i.e. from a 45° angle during the normal cast to 45° on the backhand cast.
On this new plane of casting, the thrust will need to take place just before the rod hand reaches the left part of your chest which will also act as a stop for the rod. The 20 odd centimetres that separate your hand from your chest after the thrust will be used for a small but sufficient dampening. This serves to prevent a complete stop of the rod which could bring to a closing of the loop. The forward cast is then executed with progression again and will end with a thrust which is quite advanced and with the rod almost stretched in front to take advantage of the shorter space you have for acceleration. An important thing to consider is the use of the left hand which will need to be kept as close as possible to the axis of the rod to prevent wide angles between the fishing line and the stripping guide.

The Parallel Backhand
The parallel bank hand is a much more complete cast than the classical backhand. First of all the rod isn’t held at a 45° angle but rather the rod operates as horizontal as possible and with an inclination of about 30° with respect to the water. The rod operates above your head so that it can take advantage of more space than with the Classical backhand. This increased horizontal space will give more line speed with all the relative benefits. The angle of 30° will let you cast directly to your target by taking advantage of the force of gravity and the cast will be cleaner and more accurate. Also in this case the Thrust will take place almost at the end of the movement which benefits from the maximum excursion(span) of the arm. The left hand is held up high next to the rod to keep the line in perfect axis with the rod. In the back cast the Thrust should take place more or less above your head and will be followed by a greater dampening of the rod which will be more advantageous in terms of progression. The rod during the entire forward and back cast executes an 180° arch which goes to show that the whole casting space is used.